A spotlight is often put upon the North Dakota State tight end group. The Bison “Crew Chiefs” of Ben Ellefson, Noah Gindorff and Josh Babicz are three of the most valuable red zone threats in the FCS. They rightfully deserve the attention they receive, but there is more to the Crew Chief’s room than meets the eye.

We continually overlook a valuable portion of that room, the fullbacks. The Bison fullback lineage can be traced back to great names like Jedre Cyr, Andrew Bonnet and Tyler Jangula. Oftentimes, those names went unrecognized unless they were scoring a touchdown. Their physical, hard-nosed run blocking laid the foundation for the North Dakota State offense we see today.

Senior Garrett Malstrom and redshirt freshman Hunter Luepke are looking to add their names to the list of great Bison fullbacks. While both offer slightly different skill sets, they have become a one-two punch (literally) in run blocking and pass protection schemes.

Like the fullbacks that came before them, Malstrom and Luepke’s job on the field is often deemed “thankless”. They do the dirty work, blocking downfield while receiving a minimal role in the actual offense. Despite limited carries and receptions in their stat books, Malstrom and Luepke do not see their job as “thankless”. In actuality, the outsider sees the fullback as a thankless position. Inside the locker room and throughout the football program, the fullbacks are held in high esteem because of what they bring to the offense.

Malstrom is the veteran leader of the fullbacks. He and Ben Ellefson are the only two seniors in the Crew Chief room this season. Playing in 15 games in 2017 and 15 more in 2018, Malstrom has seen plenty of snaps as a Bison. He even started at fullback in the national championship win over Eastern Washington last year.

Yet, it wasn’t always smooth sailing for Malstrom as he entered North Dakota State’s football program. An all-conference player from Frazee-Vergas High School, Malstrom primarily played offensive line and linebacker. While the transition to fullback was a little bumpy at times, many would agree that Malstrom is as stellar a run blocker as the front five for NDSU.

“There is a lot of coaching, that’s for sure. We have a really great coaching staff and coach [Tyler] Roehl is willing to put in that extra time,” Malstrom said of his early years at NDSU. “Whenever you have a question, they’ll be there to be able to give you some help when you need it.”

Ultimately, Malstrom was able to find his role in NDSU’s offense. It was not as a pass-catching fullback like an Andrew Bonnet before him, but as a punishing lead blocker for the Bison running backs. Malstrom could care less how many times he touches the ball, he would much rather lay a good block.

“The fullback has always been a staple of the NDSU offense and I personally love blocking. There is nothing better than laying a great block on somebody and I would take that over catching the ball, to be honest,” Malstrom said. “It’s just having a mentality that our group has really embraced. You bring your hard hat and lunch pail to work every day and you may not get the ball, but you’re going to work your butt off. If you do get the ball, you’re going to take advantage of the opportunity.”

Up until this season, the 6-foot-0, 250-pound Malstrom had not made a reception in his Bison career. With that massive frame in the middle of the I formation, Malstrom has garnered the name of “Meat Stick” from the team. Upon looking at him, you’ll understand why he was bestowed this moniker.

Now in his fifth year in the football program, Malstrom says the work ethic instilled in him is what he’ll carry with him for life. “The work ethic. You need to come to work every day and do your best or else you’re going to get beat,” he said. “That’s just the way it works here and at this level of college football, if you don’t put your best work out there, you won’t see results. That’s the way it is in football and the way it is in life. I feel like anyone can attest to that.”

Malstrom also has the luxury of swapping reps with his fellow fullback Hunter Luepke. The two often switch out every play. Not only does this allow Malstrom to get some rest (he has played through a nagging shoulder issue and has missed games due to a knee injury in 2019), but it also gives the fullback tandem opportunities to see the game from a different perspective. 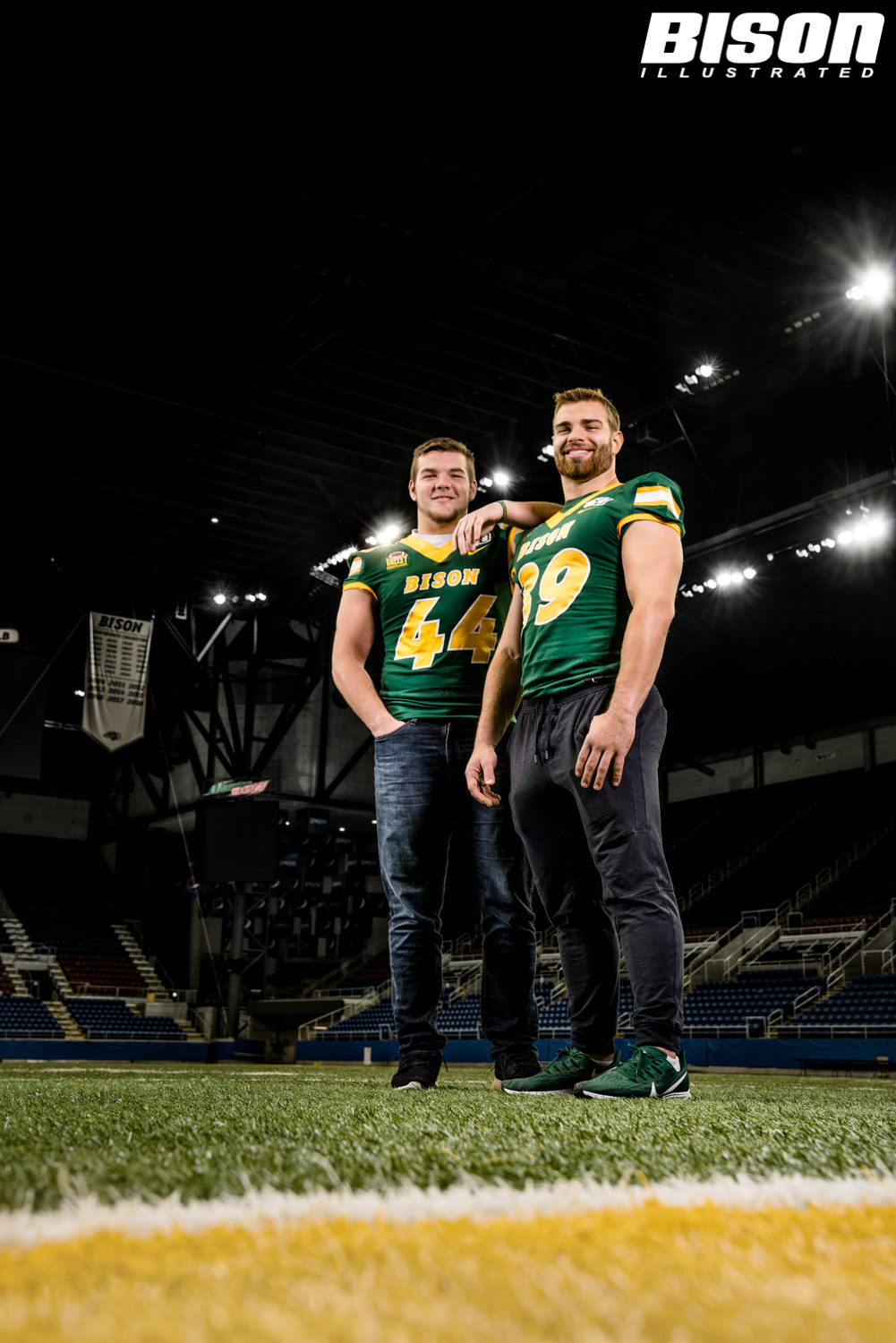 “Hunter has his place and I have mine. We’re different players because he is a little bit more athletic than I am so I’m more of a traditional run blocking,” Malstrom says humbly. “Once the game gets going and we get past our scripted plays, we’ll switch every other play. The more fresh bodies you can get in there, the better. We can both do the job, so why not wear them out with our physicality. Two is better than one.”

As the lone senior fullback, Malstrom does take a certain amount of responsibility in teaching Luepke and the other fullbacks. Behind Luepke is sophomore Austin Avery and a true freshman in Logan Hofstedt, meaning that the Bison fullback position will be rather young come 2020. For Malstrom, he has been impressed by Luepke’s willingness to learn the game and the Bison way.

“I want to do things the Bison way and he is a great kid and he’s picked up on everything. Hunter is super smart, super athletic and I cannot say enough good things about him. It’s nice for me to have another fullback to talk to,” he said. “Say if he is in on a play or I am, we can ask each other what we’re seeing out there or how the defense is playing or if we’re playing it right. That is a way that I can help him out because I have played enough snaps where I can understand what’s going on.”

Compared to Malstrom, one could say Hunter Luepke was more equipped for the running back position. He was a bruising runner during his high school career at Spencer High School in Wisconsin. By the end of his prep days, Luepke had rushed for 4,452 yards and 82 touchdowns. For his career, he accumulated 5,770 all-purpose yards and 95 total touchdowns.

While he played running back in high school, his big frame was perfect for the fullback position at NDSU. Using a redshirt year last season, Luepke was able to learn the position and the Bison offense. 2018 was also spent building on an already big frame.

“It was a little different when I was first coming into summer and fall camp,” Luepke said of the move to fullback. “I’m really thankful for that redshirt year just to get in with the guys and have Garrett and Ben [Ellefson] and those upperclassmen teach me the ways of fullback and some tight end. It was very helpful for this year.”

In an era of football that is sometimes driven by ego and personality, one could wonder why Luepke would willingly take on the fullback role. Given his stellar marks in high school, the dropoff in touches might upset a player. As we all know, Bison football is not defined by egos and Luepke is no different. In fact, he thoroughly enjoys his spot at fullback.

“It’s a lot of fun actually. Being a fullback here at NDSU, we may not get the ball as much but we’re in on some pretty intense blocks all the time,” Luepke said. “It’s a lot of fun getting your face in there and making big holes for the running backs or being in pass protection for the quarterback too.”

So far, Luepke has played in each of NDSU’s 10 games. He offers a different skill set for the Bison offense which allows him to take the occasional carry or snag a reception out of the backfield. That role will only become larger as his Bison career moves along.

“I just want to do my best to make this team succeed in any way I can. If my number gets called for a pass play, then that’s good, but if I have to be in there for blocking that’s just fine with me too,” he said. “I just want the team to win on Saturday.”

The relationship Luepke has with fellow fullback Malstrom has grown as time has gone on. With Malstrom’s career winding down and Luepke’s just beginning, the redshirt freshman is making sure to maximize the time he does have with Malstrom in the Crew Chief meetings.

“I’ve learned quite a bit from him and he’s been very helpful in the meeting rooms and on the field. When I have questions, like last year during fall camp or even this spring or fall, he is always there to help me,” Luepke said of Malstrom. “In that sense, he is also bettering his career here too. He is an awesome guy to have in the tight end/fullback room and on this team.”

Some may view the fullbacks as “underdogs” in the Bison offense. While Luepke says they do enjoy being called underdogs, they do fully understand their role on the team. If not for them, North Dakota State may not be top dogs in the FCS year after year.

“We do, but in the same sense, we’re just doing it for the team. Everything here is about the team, not an individual,” he said. “We’re working for those wins on Saturday and that’s what we love most.”

In the end, the fullback position is a true embodiment of the Bison way. Sure, Garrett Malstrom and Hunter Luepke may not touch the ball over the course of the game, but they do not care. What they do, game in and game out is all for the team and the team’s success. That quality alone is irreplaceable.

It’s time to start looking at the Bison fullback position as “priceless” rather than “thankless”.