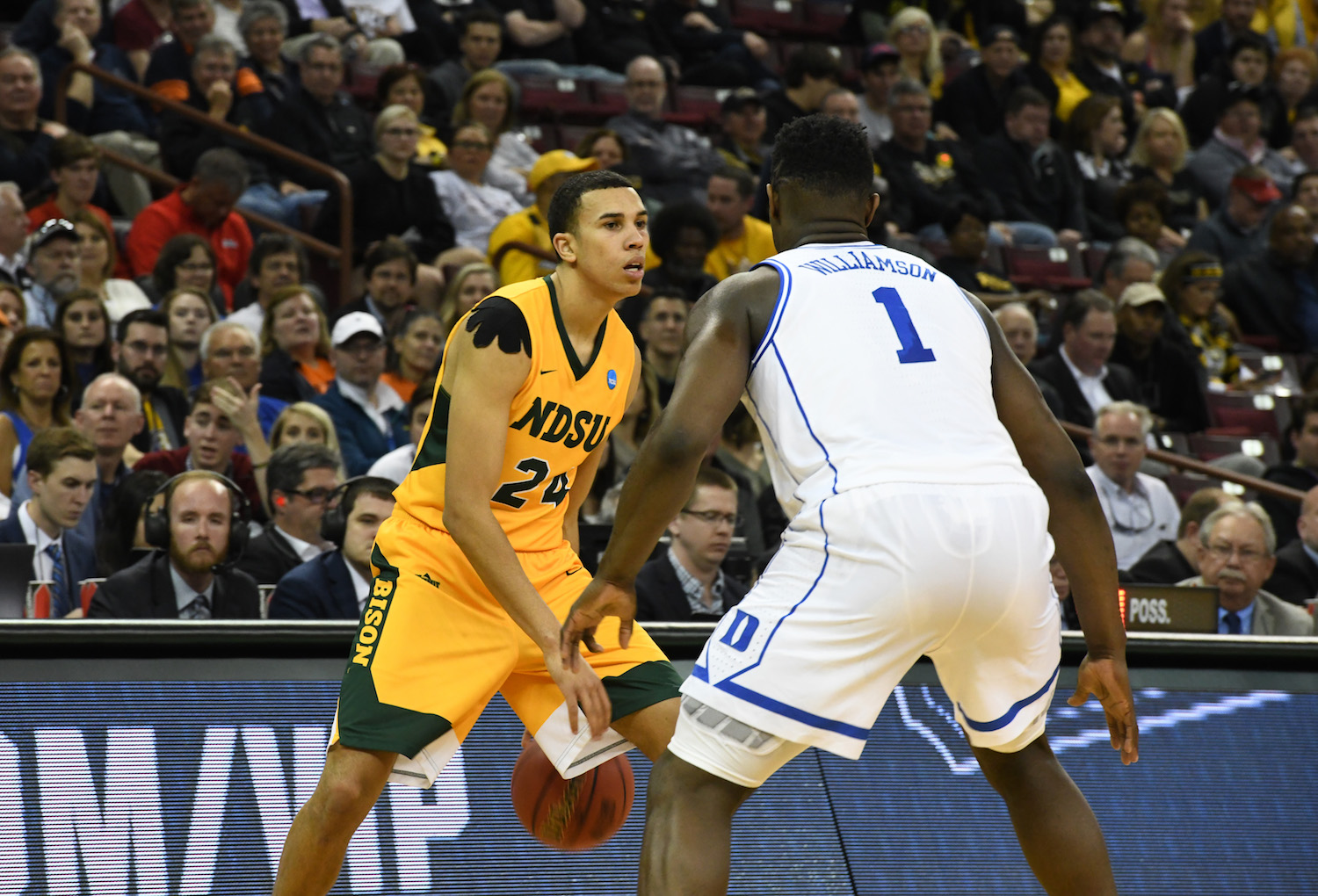 Over the month of March, North Dakota State Athletics’ Wes Offerman was quite the workhorse. Offerman, the Assistant Director of Athletic Communications and media contact for the Bison men’s basketball program, was in the middle of it all throughout the Bison’s brilliant run through Summit League and NCAA Tournament action.

Joining the North Dakota State University athletic communications office in August 2012, Offerman has developed a stand-up reputation for his quick wit and impressive ability to promote NDSU Athletics on social media. Over the last two months, the men’s basketball Twitter account ran by Offerman, has gained over 1,000 followers while “tweet impressions” are up 427.6 percent over a 28-day period. Other responsibilities for Offerman entail writing and editing press releases, compiling and distributing statistics and producing athletic publications such as game programs and recruiting materials.

I had the privilege of sitting down with Offerman to get the inside track on the life of a Sports Information Director during another memorable March that saw the Bison punch their third ticket to the Big Dance in the last six years.

What is your role at NDSU Athletics within the Bison men’s basketball program?

It really depends on the day and the time of year. My job varies a lot based on if it’s the week that we’re playing in the NCAA Tournament or if it’s the middle of the summer or if it’s the start of the season. I think that’s one thing that’s pretty enjoyable about my job; it’s never really the same day after day. It changes throughout the year and throughout the day even.

What did you have to do to prepare for the First Four matchup vs. North Carolina Central?

It’s a lot. The workload is pretty large but the more times you’ve done it, the easier it gets because you just kind of know what to expect. Once we won the Summit League tournament you get the initial blitz the next few days of media requests for Coach Richman around the country or things that the NCAA needs for the tournament. And then that will die off a little before Selection Sunday. But then as soon as the bracket comes out, that night you get swamped again with requests from the schools you could be playing, media in those areas, the host sites of the tournaments such as the people who are running the events in Dayton and all the things that they needed, the CBS and Turner Crew that are going to be broadcasting the game — they always have a lot of things that they need to be able to do a good job. So you kind of get swamped in large waves.

How do you maximize exposure when the program steps into the national spotlight?

I’ve never really been a guy that has a manual to follow or set list of bullet points of things to accomplish. I just kind of feel out the situation as it comes. So, to me, the best thing I can possibly do in my situation is to put our guys into situations to talk. They are the best spokespeople for our program. It doesn’t matter what I have to say. A lot of times it doesn’t really matter what our coaches have to say. Our best marketers for our program are our players. They are the best recruiters for our program. In that sense, it’s been pretty easy for me because I don’t feel I have to do a ton of preparation on coaching people up or building talking points. I already have 14 guys who are really good at talking about who we are and what we do.

After the team defeated NC Central in the First Four, did you plan for a remarkable opportunity for exposure for the program just in case the Bison hung around with Duke?

Yes and no. I had a feeling that our team was going to do something that was going to garner attention. I was there when we beat Oklahoma, so you had a good feeling we had a chance to win that game. When we played Gonzaga, we kept it really close and Dexter (Werner) became a national phenomenon. I would’ve been shocked if we didn’t have a splash, so in a way you kind of expect it. But from a social media standpoint, there was nothing scripted. I think it’s easier for me to do that social media type stuff if I can sit there, soak it all in, and react. I don’t want to force anything or have a pre-made plan that I’m so worried about following. I kind of think of myself in those situations as a big fan who gets to sit courtside. You just kind of soak it in and think whatever would get me excited about this game is what is going to get our fans excited about it.

Was it surreal playing Duke, the No. 1 overall seed in the tournament?

Yes. It’s almost one of those things, the further you are away from it afterward — the further down the road we get — the more you realize how unique it was. I’ve been to Macomb, Ill., a bunch of times. You know, you do a bunch of things that don’t make a big impact or they don’t stand out in your career. This is one that, as each day passes on, you sort of think back on. I was standing on the court at the same time as all these guys who are going to be in the NBA next year and next to the greatest college coach of all time.

So it definitely didn’t feel like a regular game, you would say?

No. But before a regular season game, I get really, really nervous because I just want so badly for our guys to win because I know how much goes into it from our players perspective and our coaches and just all the work and the time that they put into it. But before our game versus Duke, I didn’t really feel like that just because, as all the media said, there’s really no pressure. Yes, you want to win, but there’s really no pressure of the game being a 50-50 toss-up. And also, I’m not playing. My mindset doesn’t need to be on doing something to win the game. It’s kind of like, you’re there, you’re in this moment, let’s make the most of it.

Do you think the players viewed it as just another game once the game was over?

Yeah. I think some of our players thought that once it was over, they would just immediately think, “Oh, that was really cool. We played Duke but we lost.” However, I think their reaction was more, “We could’ve played better and did a couple more things here and there and it would’ve been a closer game or made it more interesting. We lost and now the season is over.”

Was it hard staying up to date with all the Twitter traction during the game?

Yes. When you’re playing Duke in the first half like that, and things are going well, it was almost impossible to keep up with all of the mentions or national media who might be talking about us. It was very tough to keep up with all of it. If you tried to, you’d be so distracted that you wouldn’t even be able to follow the game or realize what’s going on around you. And that’s something you just kind of get used to. The more times that you’ve done it, you realize that it’s going to be a fast and furious blitz and you just let it happen and play along when you can.

What did you think was the best-case scenario for the game?

Win. Best-best case scenario was to win. I think what we got out of the week, with getting to go to the First Four and then play Duke, I thought that was the best-case scenario.

So, essentially, you were happy they went to the First Four?

Special thanks to Offerman for sitting down with Bison Illustrated.

Thanks for reading. Have a wonderful April. Go Bison.