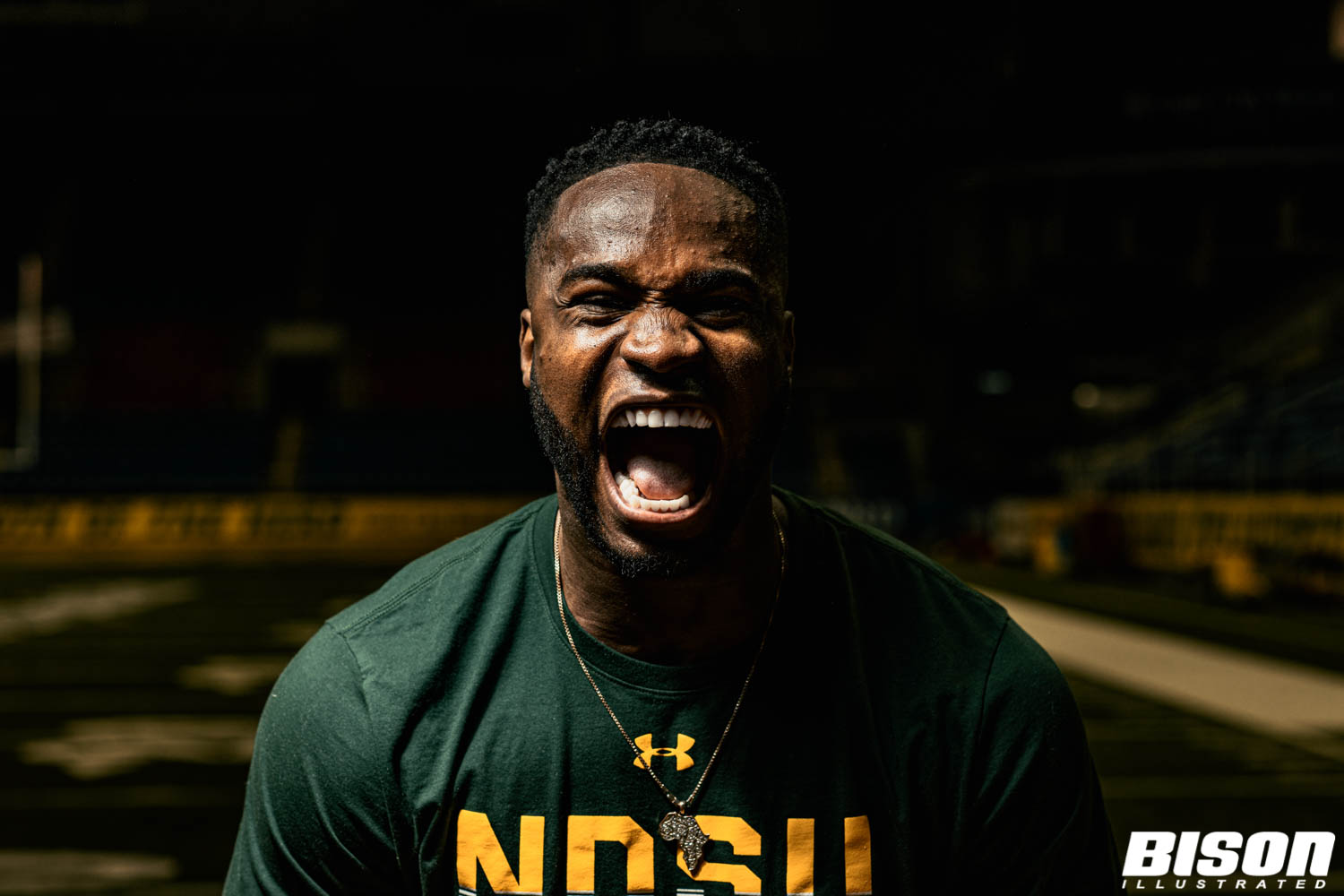 Football is still new to Bartholomew Ogbu, but the sophomore is poised for stardom at NDSU.

When you stop and learn about where Bartholomew Ogbu has been in his short life, it might amaze you. The mere fact that the sophomore defensive end is playing football for North Dakota State is remarkable in its own right. Football was something Ogbu never dreamed of playing even five years ago. Even now, he is still learning the game at its most basic level at times and he has proven to be one of the best pure athletes the school has ever seen.

However, it did not happen overnight for Ogbu. While he is new to the game, he is also a relative newcomer to the United States too. That combination has led to an eventful four years for the Shiloh Christian School product. It began with a decision to move to America in 2014. That decision has proven to be the most pivotal in Ogbu’s life to this point.

Born and raised in Nigeria, Ogbu was in search of a better education as his high school years dawned. That, coupled with increasing political tensions in Nigeria, led to Ogbu’s parents sending their son to Bismarck, North Dakota. Sports were an afterthought for Ogbu at the time.

Boko Haram, a religious extremist group operating throughout northern Nigeria, Chad, Niger and Cameroon is noted for several campaigns of violence throughout northern Africa. The Boko Haram insurgency in Nigeria is responsible for almost 52,000 deaths alone. On top of that, 2.4 million Nigerians have been internally displaced because of Boko Haram.

“Back home in Nigeria with all the political crises that went on during that time, the Boko Haram issue, coming to America was something my parents thought was the best option for me,” Ogbu said. “Going to a place where I can feel safe and have an opportunity to have an education. Sports became part of that whole deal, but my parents were just looking for a place where I can have a better education and better opportunities in life.”

Ogbu, who goes by Batty or Barty, ultimately ended up enrolling at Shiloh Christian School in Bismarck. Coming to America alone and just 16, Ogbu lived with the school’s superintendent upon arriving in America. Ogbu then lived with Shiloh’s head boy’s basketball coach for the remainder of his high school years. He still stays in close contact with those in Bismarck that helped him succeed at Shiloh.

And succeed he did. Ogbu was introduced to football in his sophomore year at Shiloh and was also a stalwart on the basketball team. A natural athlete, Ogbu jumped out to coaches despite not knowing the finer schematic details of either sport. While he was recruited to play basketball in college, Ogbu was heavily sought after by college football coaches. North Dakota State was intrigued by Ogbu and their commitment to his recruitment led to Ogbu committing to the Bison. “Mainly, I was recruited more in football than basketball and also, the relationship I had with the coaching staff during the recruiting process. A lot of coaches were talking to me, but NDSU was different,” he said. “I saw a commitment from the coaches when they would come to my games and stand on the sidelines during the winter. I felt that this might be the path for me.”

Ogbu came to Fargo with just two full years of football experience under his belt. While he was still incredibly raw on the field and had plenty to learn, his natural ability was eye-popping. Next, a year in the Bison redshirt program where true freshmen live in the weight room with coach Jim Kramer.

Upon his initial recruitment, Ogbu weighed anywhere between 205 and 210 pounds. Ogbu will likely define himself as “scrawny” when he came to campus in the summer of 2018. In just one full year in the Bison redshirt program, Ogbu gained almost 30 pounds of pure muscle. He is listed at 241 pounds on the 2019 football roster.

“The biggest change was during that first redshirt year and going into the summer with coach Kramer. The lead into the fall where we have developmental lifts and that helped me maximize my time in the weight room,” he said of his redshirt year. “I also had to focus on eating healthy and that is something coach Kramer always preaches to us. He has helped me a lot in getting stronger. When I came here, I looked like I was fit, but I wasn’t fit so working with coach Kramer for a year helped me a lot in working on my endurance and building some muscle mass too.”

Not only did Ogbu have to change his body, but he had to grow as a defensive end as well. Over the course of this past offseason, Ogbu has begun to understand the game a bit better. As time goes on, the game will continue to slow down for the sophomore.

“The game has been slowing down for me. I’m learning how to play the game from the mental side of things. Also, this past fall the biggest improvement was being able to get off in pass rush,” Ogbu said of his growth as a player. “That was the biggest thing coach Buddha [Williams] was talking about in fall camp and even now too. The biggest improvement is still just understanding the game and learning how to play the game and playing it the right way fundamentally.”

Much of his evolution as a player can be attributed to Greg Menard and Derrek Tuszka. Menard graduated last season and Tuszka is in his senior season. Both are two of the best defensive ends in school history. Those two figures have helped Ogbu learn quicker.

“Greg Menard last year was more of an aggressive leader and he would try to get the ‘mean’ part of you out,” Ogbu said with a laugh. While he is a physically imposing figure, Ogbu has a heart of gold. “Derrek Tuszka is a great leader. Every day I look up to him and I try to practice like he practices. He does it the right way and I look up to him and try to imitate what he does on and off the field. He has been a great leader to me and to everyone in that room.”

Ogbu was listed as a back-up defensive end on the initial depth chart this season. He played in four games, making three total tackles and a tackle for loss. Unfortunately, Ogbu suffered an ankle injury against UC Davis on September 21 that has hampered his season. While he is working to get back as soon as possible, it may not be until the FCS playoffs.

“When this injury happened, I felt really bad, but it’s football, injuries happen. When it happened, I told Bobby [Knodel] that I’ll be back in a week. I didn’t know how bad it was initially, but I just want to get back. I’m excited because I still have a couple of weeks left in the boot, then I start running,” Ogbu said of the injury. “I asked coach Buddha ‘if I get ready and I’m back, are you going to play me?’ and he said ‘get ready’. I just want to get back there with my brothers. It’s a lot different on the sideline watching them. I cheer them on and support them, but being out there with them is a lot different than standing on the sidelines.”

When he does get back, the foundation is there for Bartholomew Ogbu. He has proven himself a valuable and generational talent at defensive end. That is something he could have never imagined growing up in Nigeria. It took him coming to America to find football and he has never looked back since.

Ogbu himself sums it up perfectly when asked if he ever imagined himself playing college football when he came to America in 2014.