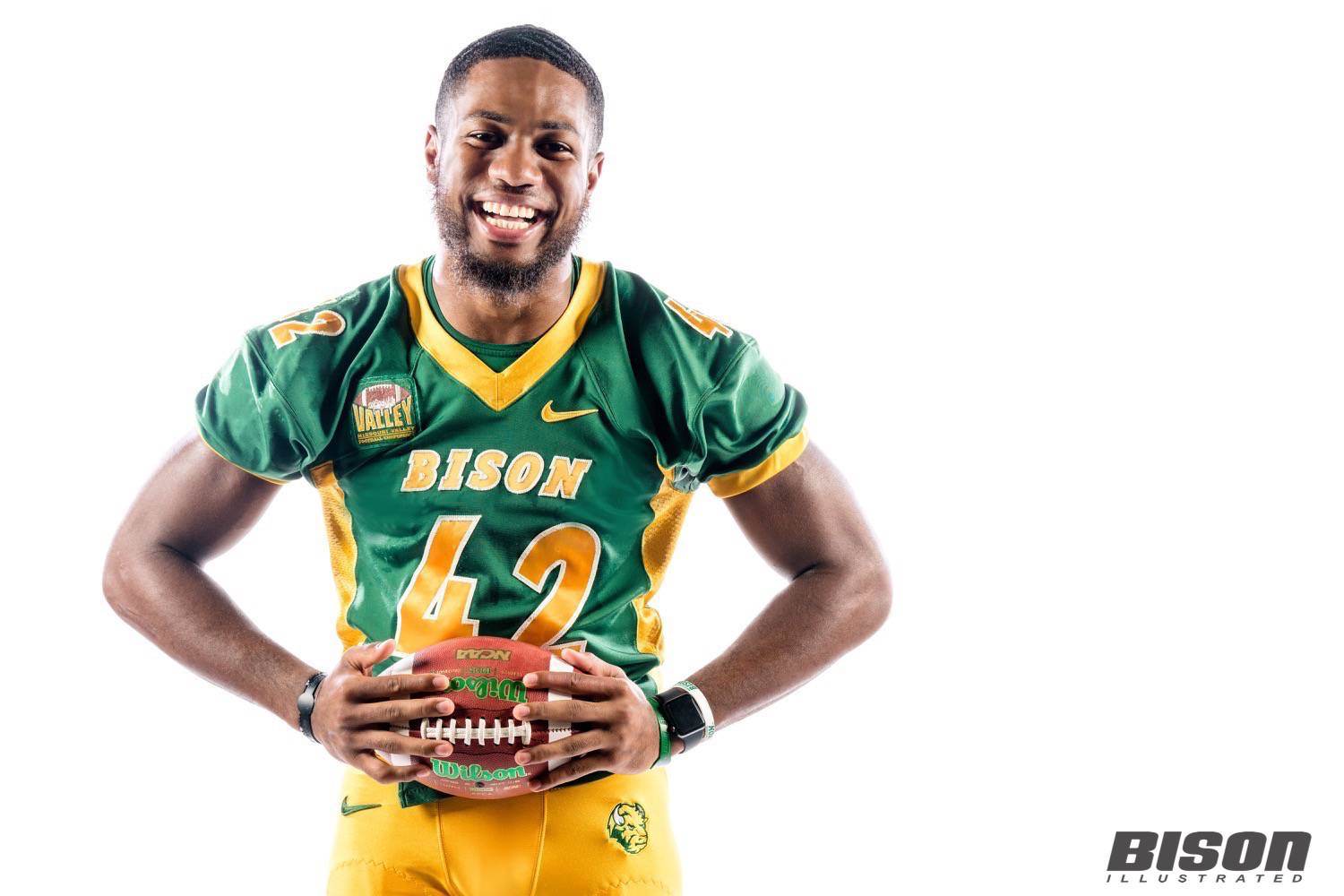 Linebacker Jabril Cox’s greatness on the football field was forthcoming. Yet, when he broke out in 2017, many did not see it coming.

Linebacker Jabril Cox wants to build on a breakout 2017.

Jabril Cox’s greatness on the football field was forthcoming. He was poised to be a key contributor to the Bison defense at some point. Yet, when he broke out in 2017, many did not see it coming. They may have been anticipating it later, maybe after Nick DeLuca graduated. However, Cox was ready to take the next step forward right away. What ensued was a season where he was named Missouri Valley Newcomer of the Year. Even with future NFL signees Nick DeLuca and Chris Board alongside him, Cox thrived.

Now, Jabril Cox is the star. He now sees himself as a leader and is noticing that younger players look up to his leadership.

“I know there are younger guys looking up to me, so I need to mature so I can teach them too,” he said. “We just need to be well-rounded in the linebacking corp.” It is Cox’s belief that production from all of the linebackers only makes his game improve. That is where he feels he will build and improve from last season.

For Cox, it may seem like an uphill climb to top 2017’s performance from a statistical perspective. On top of the Newcomer of the Year award, Cox led the team with 75 total tackles. He also compiled 4.5 sacks, an interception and a forced fumble. Cox did this, while only starting eight games for the Bison last season. A truly impressive feat, given the amount of playing time he had last season.

One asset that stuck out to fans and competitors in 2017 was Cox’s speed. His 6-foot-3, 231-pound frame allows him to make plays on the ball a lot faster than a bulkier linebacker. In essence, Cox can tackle and disrupt plays like a linebacker but possesses the speed of a safety. While that is an extremely dangerous weapon for the Bison defense, Cox feels his speed was somewhat underutilized in 2017.

“I know a lot of times last year, I didn’t know where to go, but my speed took me to the play,” he said. “This year, I think knowing where I need to be will help me a lot more too. I’ll be able to make plays a lot faster since I’ll know where to go.”

That statement alone is enough to frighten opponents, but it also indicated that Cox has room to grow in 2018. He no doubt has tremendous football instincts, but the playing time he received last season allowed him to understand Matt Entz’s defense even more. With three years of eligibility left, the Kansas City native looks to become one of the most dominant defensive forces in NDSU history.

With veterans like Levi Jordheim, Dan Marlette and Aaron Mercadel joining him in the linebacking corp, that unit may become one of the most disruptive in recent memory. “Whether it be scout team or first team, we are a close-knit group,” Cox said. “Knowing our strengths and weaknesses it helps a lot in playing on the field. We have this instinct where we know what the other is going to do.”

Jordheim and Marlette (who missed much of 2017 due to injury), the two senior linebackers, played in 14 games in 2017 and made a combined 53 tackles. Mercadel, the lone junior, played in all 15 games, made 24 tackles and forced a fumble. With that amount of talent and depth returning, offenses will get a steady dose of fresh-legged linebackers. This lends a hand to the tremendous expectations put upon this 2018 NDSU team. Cox knows what the Bison mindset needs to be.

“We just try to stay humble,” he said. “Whatever we did last year is behind us and we look to just get better now.”

That sentiment seems to ring true across the Bison football team. As Cox looks to improve in his sophomore season, he will look to take on a leadership role within NDSU’s defense. It may be a challenge for any other sophomore, but for Cox, it is necessary. If last season was any indication, his evolution to defensive field general should take place sooner rather than later.

Jabril Cox’s impending stardom seems to be coming and he is ready to become NDSU’s go-to guy.