Bison Past And Present: Albert Gibson, At Home In Fargo

Former North Dakota State Bison defensive back Albert Gibson has settled in to the city of Fargo after coming from Florida in 1995.

Former Bison defensive back Albert Gibson has settled into the city of Fargo after coming from Florida in 1995.

The recent string of athletes coming to North Dakota State from Florida can catch some fans off guard. However, Albert Gibson is not one of those people. Gibson, a 1999 graduate and football alumni, came from the sunshine state back in 1995. His dream? To play football for the North Dakota State Bison. What he may not have forecasted was staying in the Red River Valley long after his playing days ended.

While he played sparingly in his freshman and sophomore campaigns, Gibson was still able to warrant a “ball-hawking” distinction. He accumulated 21 total tackles, one interception and two fumble recoveries (one of them going for a touchdown) in the 1996 and 1997 seasons. Those two years saw the Bison go a combined 15-7 on the field with an NCAA Division II Playoff berth in 1997 after going 9-3. That playoff campaign was NDSU’s first season under head coach Bob Babich. The Bison would end up losing to Northwest Missouri State in the first round of the playoffs.

Yet, those numbers in limited playing time caught the eye of coach Bob Babich. Babich had taken the reigns from Rocky Hager after the 1996 season, Gibson’s first year. While a transition in coaching is rare at North Dakota State, Gibson says that shift did not alter the team’s productivity. “Going from coach Hager to coach Babich, it was two different personalities, two different people,” he said. “But actually a lot of the staff stayed intact. Our defensive coordinator (Gus Bradley) stayed, so we had the same defense, the same terminology. So that was not too big of a transition. Obviously, everything flows down from the head coach though, too.”

Despite the change in head coaches, Gibson thrived in Gus Bradley’s system in his junior season. He was tied for the team lead in interceptions with four and was tied for third on the team with 67 total tackles. Unfortunately, the Bison only went 7-4 that season and missed NCAA Division II Playoffs. 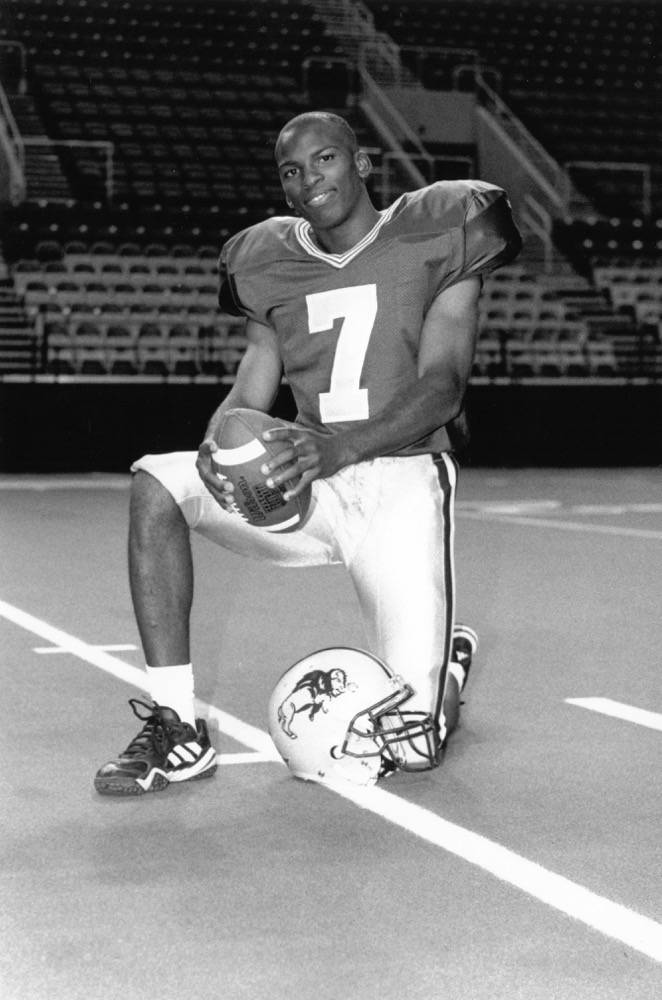 Looking back on his time with NDSU football, who was then a Division II school, Gibson could see the underpinnings of Division I success. “I did expect them to do quite well when they moved to Division I,” he said. “For me, a lot of that had to do with having grown up in Florida. Florida, Texas and Alabama tend to produce a lot of talent when it comes to football. So coming from there to here, seeing the talent we had, I could see it. I mean we put together some good teams! It does not surprise me to see how successful they have been because I figured they could be given the talent they had back when I played.”

While the sunny weather of Florida is often tantalizing to players once they are done at NDSU, Gibson stayed put. There were many factors in his decision to stay in Fargo, but there were two primary reasons. “A big reason I stayed around here was the church that I found,” he said. “And also being in college, you make these contacts and you have a sort of network so to speak. Those were two of the biggest reasons I stayed.”

When Gibson first graduated from NDSU in 1999, he found a job at a local trucking company in Fargo. Gibson says he was able to get that job right out of college thanks to the contacts he made while at North Dakota State. He then moved to a position for the City of Fargo and has never looked back. “When I first started at the City of Fargo, I was working in the auditor’s department. So basically accounting and things like that,” Gibson said. “Now I am the office manager in the planning and development department. So my main duty or responsibility is to make sure the office as a whole runs smoothly.” Gibson and the two employees he is privileged enough to manage are tasked with making everything in the planning and development office run evenly. “Everything from making sure meetings, rooms and computer stuff is all set up, to simple office supplies. Making sure people have something to write with, we do all of that.”

The former Bison has spent over 10 years with the City of Fargo and has seen the city change over the course of his time in the city. “Having worked at the City of Fargo, I can see how the city is growing because I could remember the town when I came up here in 1995,” he said. “It was not very big, at least not compared to now. It has grown a lot and it’s a really interesting place.”

Gibson, who is now married with two children, does see one overarching theme with Fargo and its Bison. “Around here, Bison athletics is very big and that’s a huge plus for me,” he said. “And I think that has to do with the fact that other places have professional teams. Not having that around here puts a big emphasis on the collegiate level. So that is pretty impressive to me.”

Albert Gibson has gone from Florida to Bison football to a permanent resident of Fargo in less than a decade. While it was a decision that may not have been in the cards in 1995, it is one he does not regret for a second. With his budding family and wonderful career opportunity, it seems that the Gibson family will be staying in Fargo for years to come. As Gibson says of Fargo, “It’s a little city up here in the Upper Midwest that has a lot going for it.”

Bison Past And Present: Albert Gibson, At Home In Fargo